HOW TO ELOPE IN ALASKA

The Ultimate Guide to planning an elopement in the last frontier

Alaska is a wonderland full of towering mountain peaks accessible by hiking or helicopter, abundant wildlife, and adventures for days. Consider this your guide for how to elope in Alaska.

Let’s talk how to elope in Alaska.

When you decide to elope, there are a LOT of locations up for grabs. Colorado, Wyoming, and Hawaii are all high on the list, but there is truly no place that rivals Alaska. Especially since parks like Glacier National Park, Rocky Mountain National Park, and others are now requiring reservations for particular days that sell out faster than concert tickets. While Alaska is the biggest state, it is also the least inhabited, which means lots and lots of natural beauty and wilderness just begging to be used as a background as you and your partner say, “I do.”

Plus, there’s the Northern Lights, places to go whale watching and to see bears. BUT before I give all of Alaska’s secrets away, get ready to settle in and prepare to be inspired. Alaska is one of my favorites, and I’m breaking down ideas and tips on how—and where—to have the most fantastic elopement. With me as your Alaska elopement photographer, of course!

Best Times to Elope in Alaska

Also, as a side note, there are times of the year that are better if you want to elope in Alaska. Of course, this depends on what you want as a couple, but traditionally the best weather months are May-September. May and June can have great weather, and September starts to show beautiful colors. Though this shoulder season means some activities might be just ending or not yet started.

The longest daylight hours will be in the months of May-early September. In contrast, if you want to experience prime time for the Aurora Borealis (otherwise known as the Northern Lights!), they can be seen from September through April. BUT, if you want your best chance at seeing them, consider visiting Fairbanks in January-March. Once the weather calms down after the turn of season (the winter solstice), it means skies will have a better potential to be clear. It is, essentially, when the geomagnetic recipe is better. There is less daylight in autumn, yet that makes it better to see the sky illuminated with breathtaking colors.

While August does see long daylight hours, it is actually the wettest month in Alaska! That means there’s more potential for helicopter tours to cancel/reschedule due to weather.

In contrast, the driest month? May!

Have You Booked Your Rental Car?

June-August is the prime season for great weather, but also for tourism. Since the pandemic, rental car demand has skyrocketed, meaning for a compact car from a company (and not Turo, the rental car version of AirBnb), you can expect to pay at least $1500 or so, for around 6 days. That is personally the best deal I’ve found. After Labor Day, demand for rental cars goes down and by mid to late September, rental car prices are nearly half of what they were in June-August. If you are okay with a premium for your rental car for peak summer, then book early! That also means if you’re booking out-of-state vendors (like photography), you’ll be doing them a favor by booking them earlier too, so they can get their rental car booked as well!

Many rental companies also do not allow you to take your rental off paved roads, so taking the scenic route through Hatcher Pass to Talkeetna is a no-go. Be sure to check up on their policies!

Are you ready to elope your life?

Let’s create a day for you that’s wild, bold, and full of fun in a dramatic landscape!

Perfect Locations to Elope in Alaska

Ok, Alaska is massive. There’s no doubt about that, but several places are ideal for having a gorgeous yet simple Alaska wedding against the stunning landscape. An Anchorage elopement will look much different than one in a more rural location, such as Fairbanks. Peek at the areas below, and see what strikes you depending on what you both have in mind.

Although this is the largest city in Alaska, an Anchorage elopement has the advantage of city vibes surrounded by incredible, snow-capped mountains. Such a gorgeous location! Another bonus is that Anchorage has an airport, which means that you don’t have to travel far or get a connecting flight to a more remote location.

The Chugach State Park is right next door, and Kenai and Talkeetna are close. So if you want a more rural feel to elope in Alaska, you can fly into Anchorage and have those “get away from it all” photos that Alaska is known for.

With the city being the state’s capital, a Juneau Alaska elopement has a more urban feel, but don’t let that discourage your wilderness-loving heart. Juneau is known for amazing wildlife—whales, birds, and bears…oh my!—and you can easily reach the city by ferry or the airport but NOT by car. Crazy, right? If you love glaciers, there are also 40 near the capital city, giving an elopement in Juneau a genuinely unique feel. The nearby Tongass National Forest is also the largest intact temperate rainforest in the world.

The Seward area is south of Anchorage, and you can catch a 35-minute flight to get there. It’s also a 2 ½ hour drive between the cities, but the ultra-cool way to get there is by train. The trip is four hours, and the views in between are ah-mazing! Seward is definitely more rural and has lots of wildlife and trails. Plus, it’s on the water (like a lot of Alaskan cities!), which makes for gorgeous images, too.

Denali just may be one of the best reasons for getting married in Alaska! The National Park and Reserves are nothing shy of breathtaking, and they are the perfect outdoor space for saying your vows to your future spouse. Trails, mountains, and gorgeous views are just a 1 ½ hour plane ride—or eight-hour train or four-hour drive—from Anchorage. P.S. You can also fly from Juneau, which is just under two hours.

The truly adventurous will adore Fairbanks with its rustic atmosphere. Get ready to embrace the wilderness and include a bit of fun into your Alaskan adventure, such as snowmobiling, watching the Northern Lights, and visiting a reindeer ranch. It’s just an hour’s flight from Anchorage, or a—yikes—12-hour train ride (but just imagine all you’ll see!). It’s an eight-hour drive between the two locations if you want to rent a car and make a few stops along the way.

Best Activities to Do When Eloping in Alaska

One of the most amazing things if you want to elope in Alaska, is that there are so many things to do that are unique to the state. When you plan your elopement, you can include these ideas into your photos, or you can stay on your honeymoon and check these off of your list. There’s no lack of adventure for those who love nature and the great outdoors!

How to Get Married in Alaska

One important thing about eloping in Alaska is actually getting married. What do I mean? Well, an elopement goes beyond looking fab and having images with your sweetie against a fantastic landscape. There’s paperwork and legality to think about, but it’s not as hard as you might think! Here’s the nitty-gritty:Marriage License

How Much Does it Cost to get Married in Alaska?

You need to obtain a marriage license (the current cost is $60, and you can download the PDF here), which is valid for 90 days. Be sure to get it within a reasonable timeframe for when you plan to get married. No blood tests are required, and you have to be over 18 (under needs parental consent).

There is a 3 day waiting period, and you will also need an ID and birth certificate, if you are mailing or faxing (so ‘90s!) your application, you’ll have to have a Notary Public to witness it before you send it off.

Your application must be turned in to one of the following:
The Vital Records Office in Juneau or Anchorage;
OR
An Alaska Court

Do You Need a Witness to Elope in Alaska?

Alaska also requires two witnesses during your elopement—I can be one of those! For more information on getting married in Alaska (or any other state), check out my handy blog post with all of the essential links.

So, are you ready to Elope in Alaska?

I love Alaska, and it’s no secret! And I totally enjoy trekking with my couples (literally anywhere) to capture the vision they have in mind. If you need services other than photography, I highly recommend:

The Teal Door is fantastic to work with, as well as Meraki Floral!

Hair and makeup artists are particularly hard to come by in Alaska. Though she’s based in Oregon, my top adventure elopement specialist is Meaghan, of Fleurt Beauty Company. She offers concierge service (a tagalong service of sorts!) and knows what extra details adventure elopements take. Tell her I sent ya!

Ready for your best adventure yet?

Don’t let availability and opportunity pass you up – reach out and let’s start planning your epic adventure! 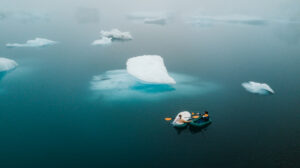 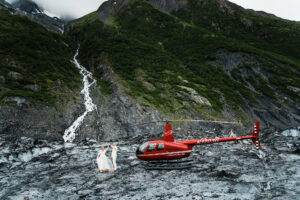 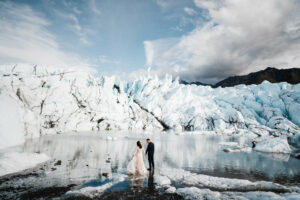 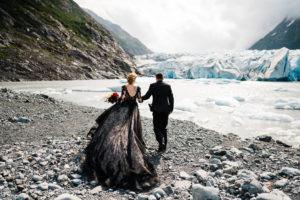 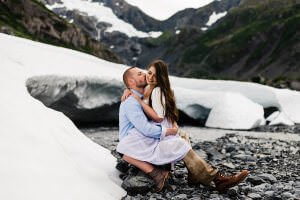 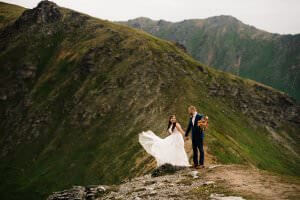