Christine & Matt wanted a stress-free day that incorporated their love of adventure (and each other!) in an otherworldly setting. They chose the majestic Redwoods/Oregon Coast combo, and it sure delivered! As we all know, the weather can be wicked and unpredictable in the winter months. This elopement had an interesting twist of being right in the middle of a freeze warning, so the moody skies made for awesome photos, and definitely a chilly day.

Their elopement festivities kicked off early, with a flight from their home in North Carolina to Portland, followed by a road trip down the 101 highway to the Redwoods. The day itself was filled with lots of special touches, like Matt’s cufflink portraits of their dogs, Murph and Moochi and their elopement date embroidered on the inner lapel of his suit. Christine wore a beautiful white stole over her dress (perfect for February!), and both wore Carhartt boots with custom colored laces that matched Matt’s bowtie.

We spent an hour exploring and then it was time to meet up with their friends from N.C. Daphne and Logan for the wedding! Daphne, who has been friends with Christine since childhood, couldn’t hold back the tears during the vows. Afterward, C & D recreated an iconic photo from their childhood before we set out as a group to hike the grove. Matt joked that he was looking for the best new home for himself and Christine, as he pointed out every burrow and hollow. After a fair bit more hiking and joking about being “between two ferns,” it was time to head to SeaQuake for lunch. After an awesome lunch (the taco special was a big hit with Matt and Logan!), it was time to part ways with Daphne and Logan and head to the coast. We arrived at gorgeous Sister Rock and were greeted by the most magical light as we hiked along the coastline, checked out a sea cave and scrambled over rocks. We all left tired, but exhilarated and humbled by the beauty of the day.  Afterwards, Christine and Matt got tattoos to commemorate their elopement, and happen to look just like Sam’s redwood tree tattoo. It was an awesome adventure to shoot Christine and Matt’s day, and I wish them all the love!! 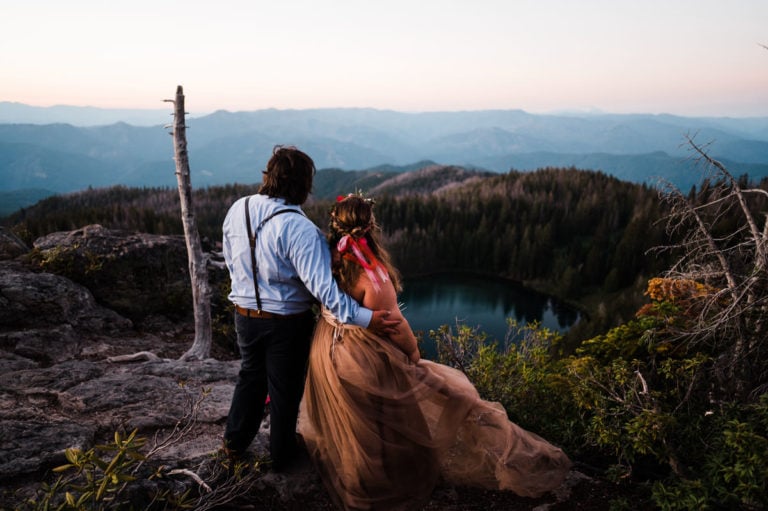